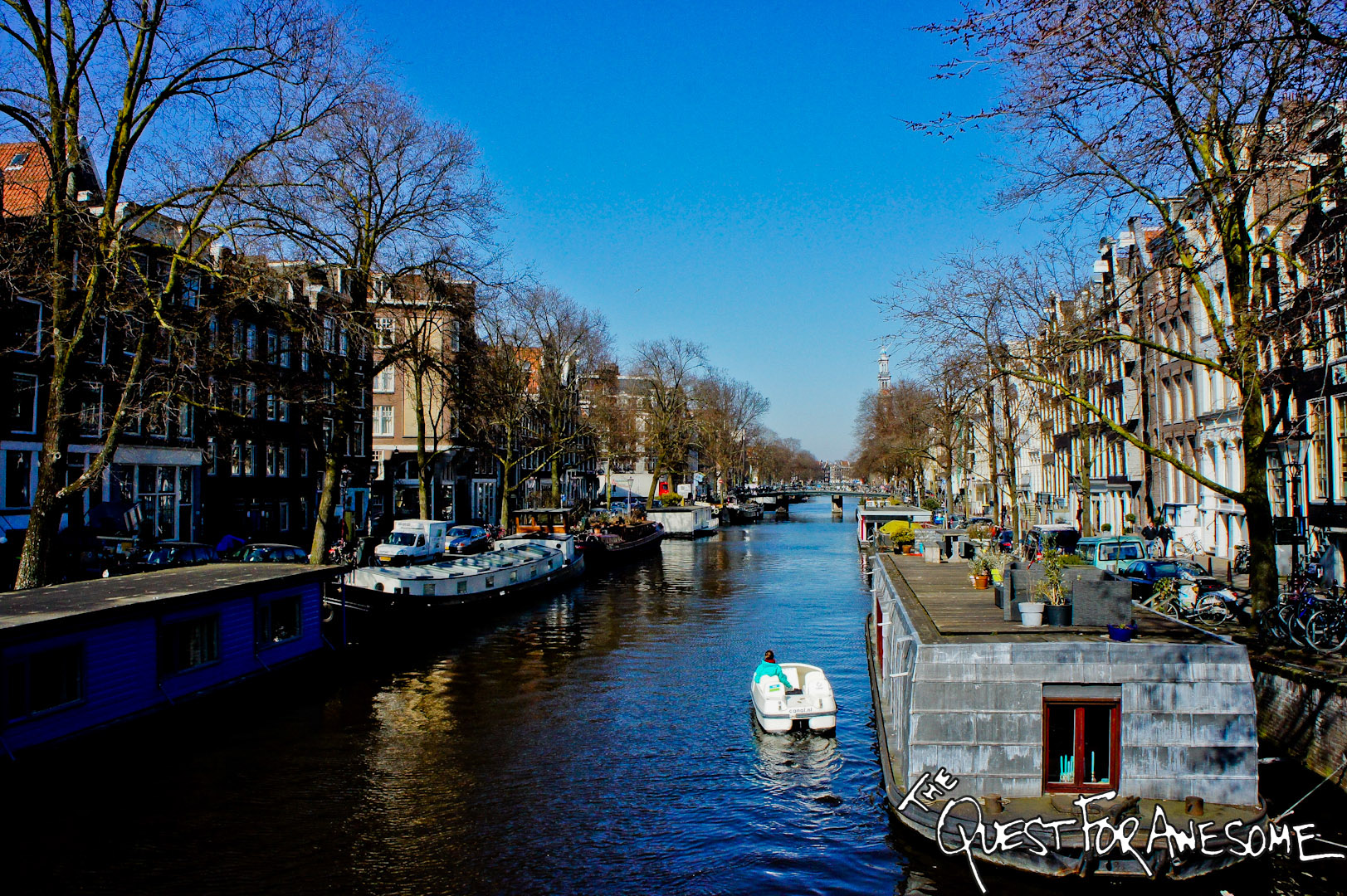 This is the seventh post in a 12-part series detailing my monthly highlights from a year long trip around the world. To start at the beginning: click here

For month seven of the trip I finished up my time in Jordan before heading over to Europe to begin a three-ish month long Eurotrip done mostly by train.

I flew into Spain where I enjoyed Madrid for about a week before ending the month by flying over to Dusseldorf and taking a train over to Amsterdam.

Some of the highlights you’ll find below include: exploring a ship now part of the ocean, reenacting scenes from the movie Predator, free spa quality mud baths, tandem bike rides and spelling TITS in Amsterdam.

There were some highlights I omitted due to them being very picture heavy and not having said pictures due to the theft of my camera.

Shipwreck Dive in the Red Sea

I found an amazing hotel/hostel in Aquaba, Jordan offering Red Sea views and scuba diving for affordable prices. I quickly booked my first-ever wreck dive of a shipwreck nearby accessible from the beach.

It’s amazing how well the Pirate’s of the Caribbean movies captured the way man-made objects slowly become one with the ocean.

The ship had truly become a part of the sea, it still had its shape but was now teeming with life growing into, around and all over it.

Officially on the road for 6 months

One of my long time bucket list items has been to travel for 6-months.

Although I’m an avid proponent of attempting to live in the moment and enjoying the journey and not the destination, it’s nice to look up and notice you’re accomplishing goals you’ve set for yourself.

Growing up a swimmer I was introduced to the water and floating at a very early age. Being able to keep your head above water was a skill you had to learn and the “egg beater” and “hand skulling” were techniques one had to use to keep from getting water up your nose.

In the dead sea you can float in a standing position with hands up and you won’t sink past nipple level. Curl up into a ball and you float like you’re wearing a life vest. Flip on your stomach and there’s no skulling required to keep your head above water.

The dead sea is over 1,000 feet below sea level, which means it’s easy for water to get in but there’s no escape for the water except through evaporation.

The end result is a body of water with astronomically high salt levels–just take a dip and air dry and your skin will be caked in it.

Anyone you interact with near the Dead Sea will advise you not to drink the water or get any in your eyes. 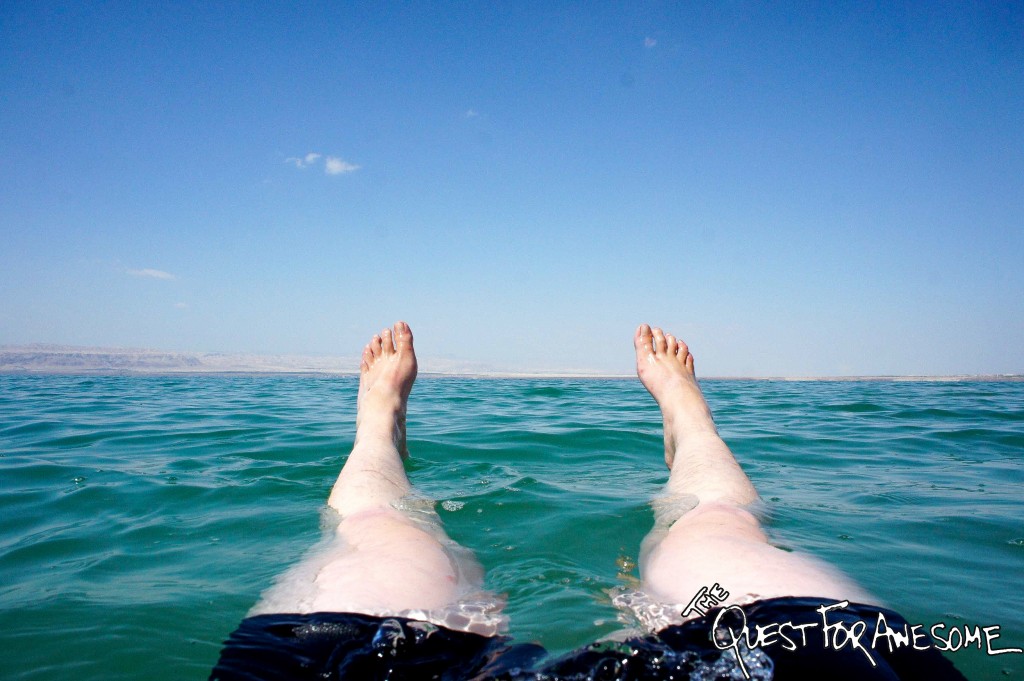 The Dead Sea is so buoyant I could hold my camera and take this picture with no effort.

The Dead Sea is a great place to observe social customs.

It seemed like men could do whatever they wanted when it came to enjoying the atmosphere.

Women, on the other hand, took a more reserved role. The majority stayed fully clothed and didn’t go in or just dipped their feet in. There were women who went completely into the water, but it was in a burqini.

After I had had enough people watching I dug into the Dead Sea mud.

Arnold Schwarzenegger is getting old and likely wouldn’t be able to save the world if there was another Predator visit.

So, if the Predator ever returns to Earth, the Dead Sea is where you want to be (link to Predator mud scene).

Or you can visit if live action roll playing is your thing. I recommend the following Predator quotes:

“You give away our position one more time, I’ll bleed ya…real quiet. Leave ya here. Got it?”

“GET TO THE CHOPPAH!”

“This stuff will make you a god damned sexual Tyrannosaurus, just like me.”

Predator fantasies are just one way to enjoy the Dead Sea mud…The other way is as a nutritious and rich, spa-quality skin treatment.

I never understood the mud masks and mud baths you always see advertised at expensive spas, but, let me tell you, when I was done yelling Predator quotes and had to wash the stuff off. Ooooooo boy. My skin!

It was as smooth as melted butter on a newborn’s tushy in a silk raft floating on a summer lake at dawn. 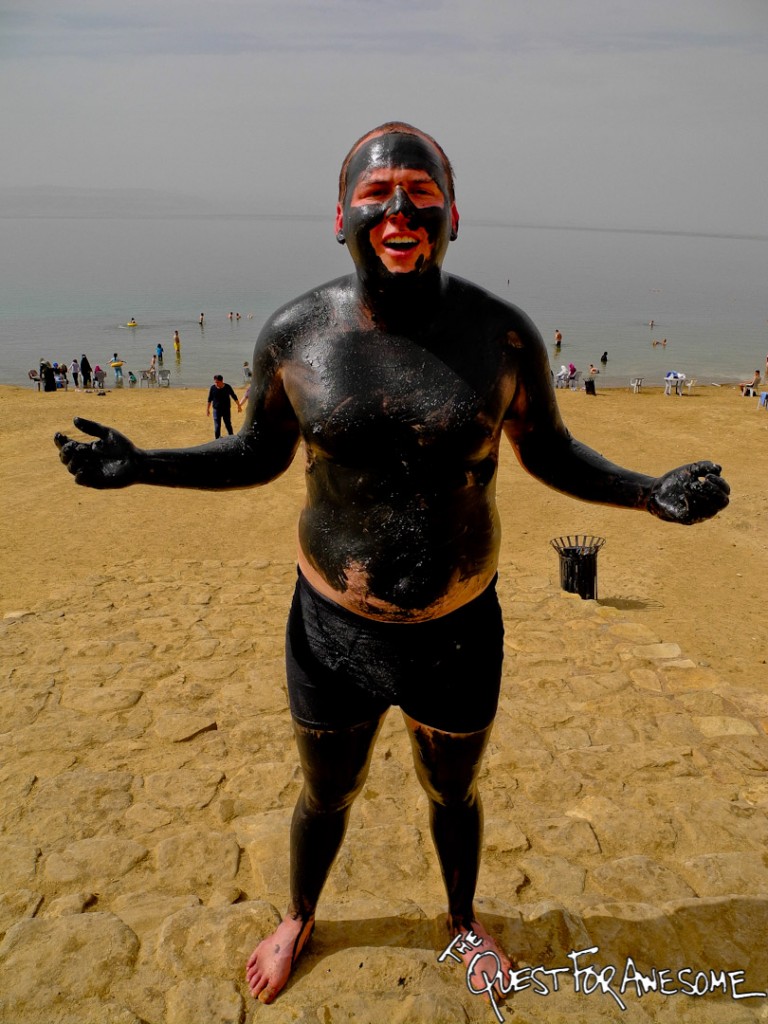 Keeps me safe in case The Predator decides to come back and attack Earth.

Mending a Hole in my Pants 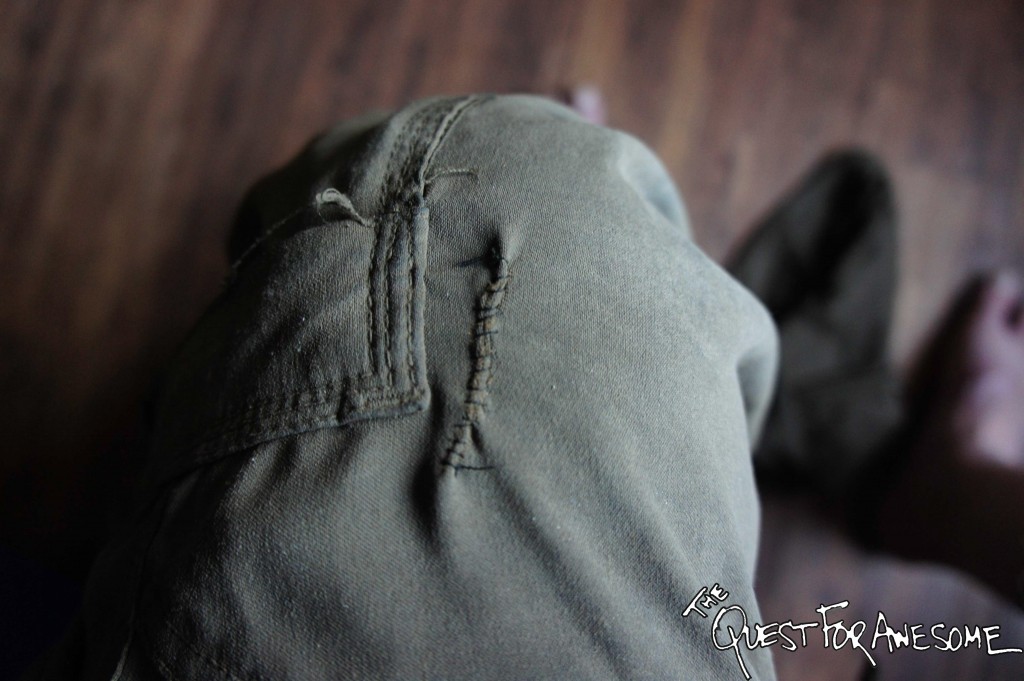 My girlfriend at the time made her way out to visit me for a week. We met in Dusseldorf, Germany before making our way via train to Amsterdam and back for a few days.

Even though I lost many photos when my camera was stolen I had sent her a few photos via e-mail beforehand, so lucky for you, you can experience this little mini adventure through some of them!

In Amsterdam we wandered the Red Light District and people watched.

My favorite was watching a man all by himself; he looks visibly nervous, his head is darting around and his movements are jerky. The women in the windows are trying to get his attention and you see him get uncomfortable every time he makes eye contact with one.

Eventually you see him make his way up to a window; it opens and the conversation begins. Sometimes the guy will quickly move along, more often they will stay and talk, slowly inching closer and closer.

Before you know it, he’s in the door and it closes. When he emerges again you can see he’s still uncomfortable as he scurries way, but, the smile is unmistakable.

In Amsterdam there were many firsts. I took my first tandem bike ride and my first pedal boat ride through Amsterdam’s beautiful canal network.

I also ate at Cafe de Reiger, which was delicious, but more importantly, we split the check.

WRAP YOUR HEAD AROUND THAT! 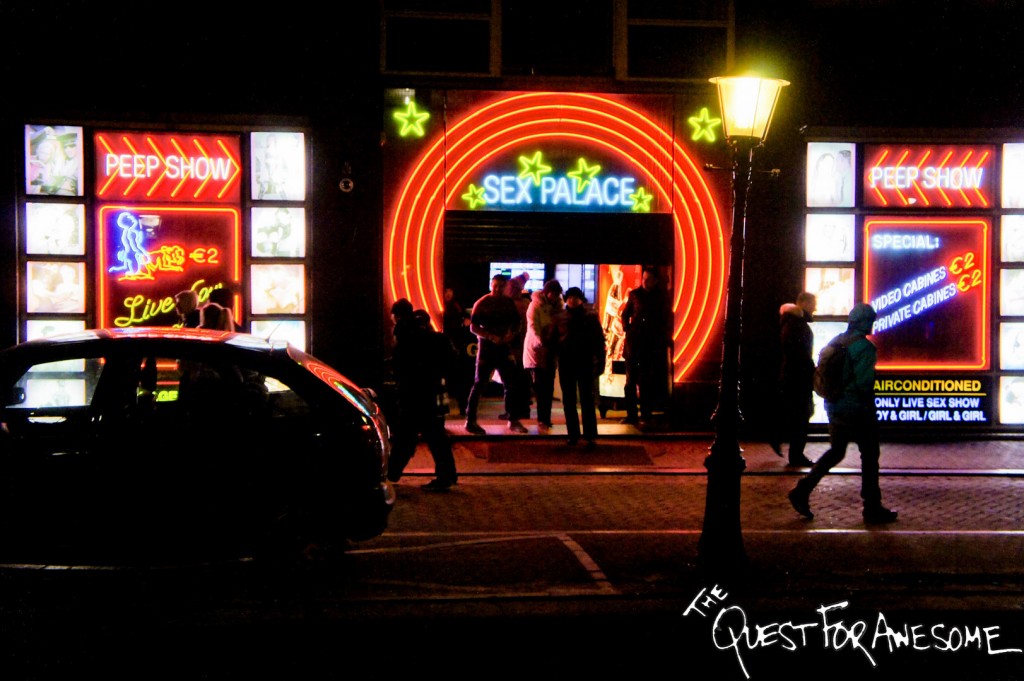 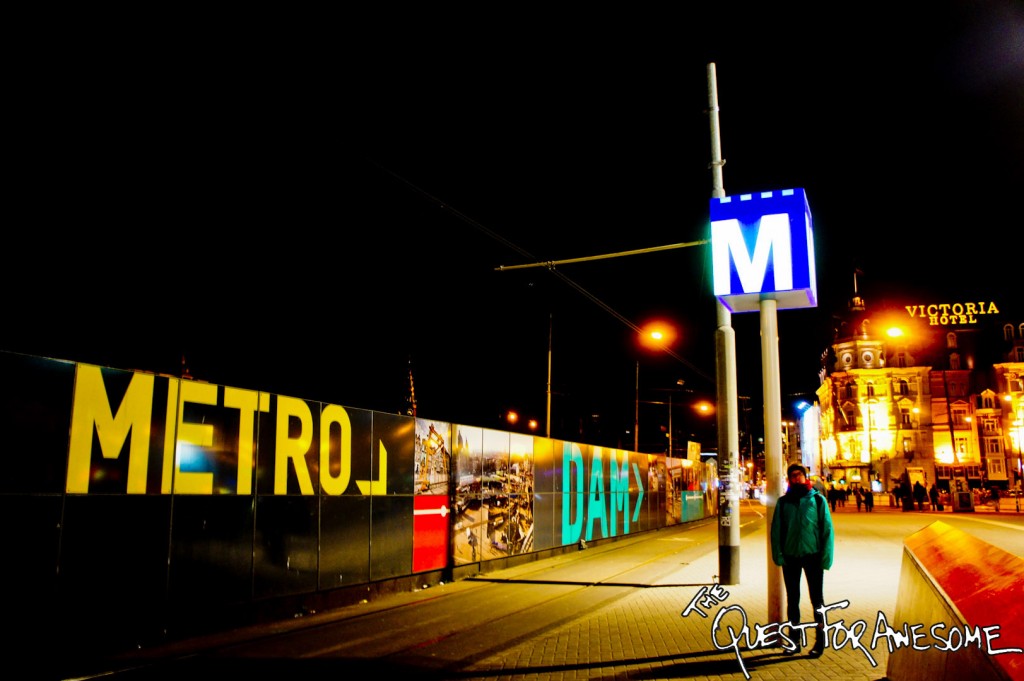 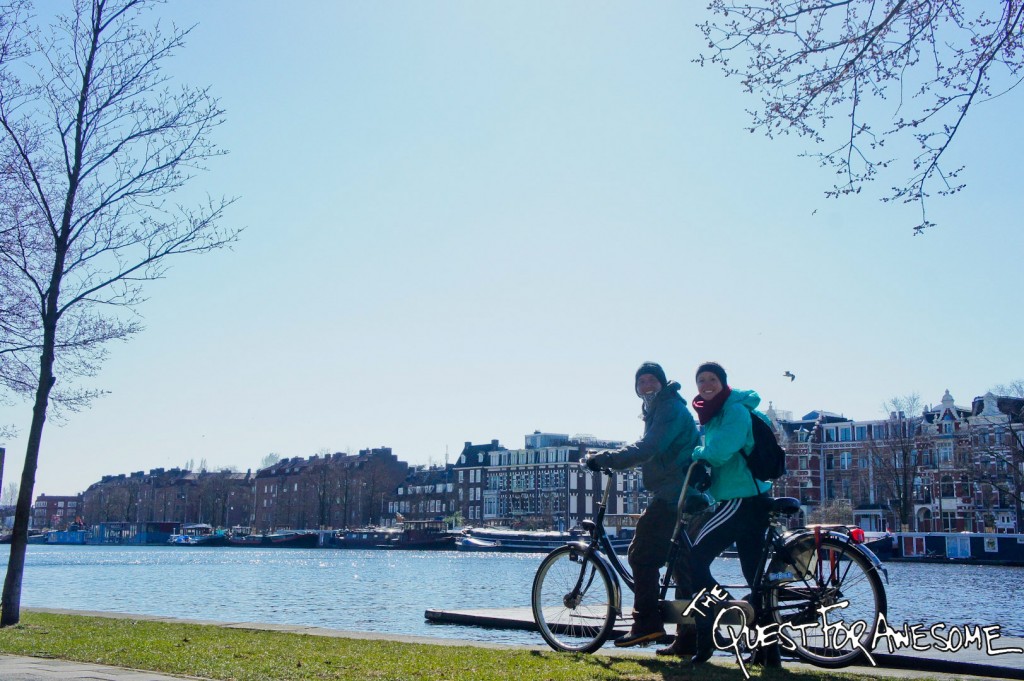 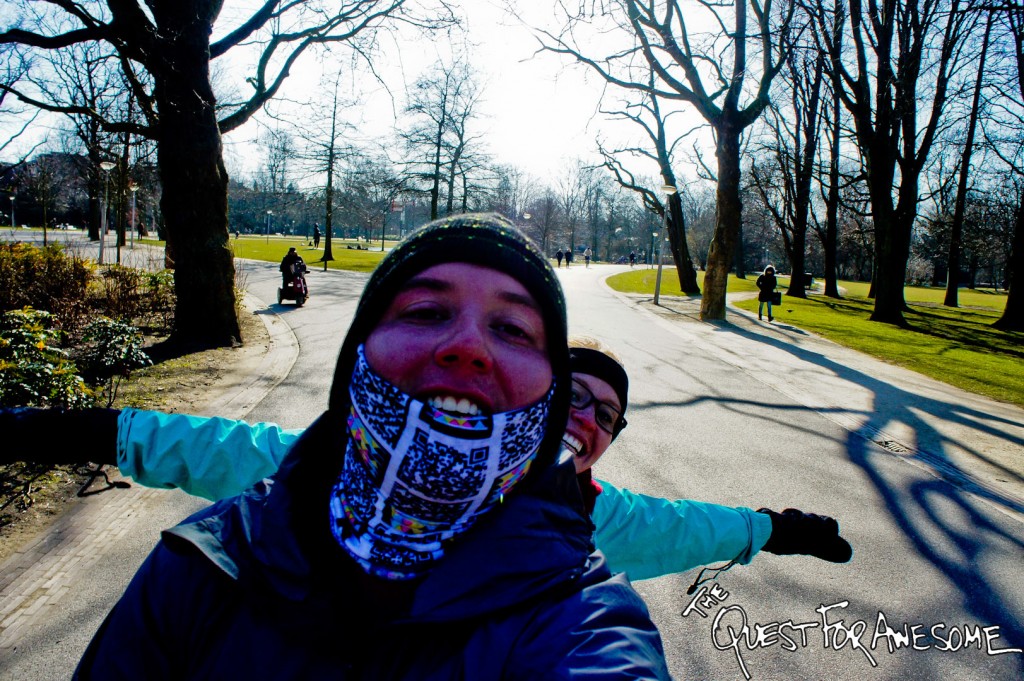 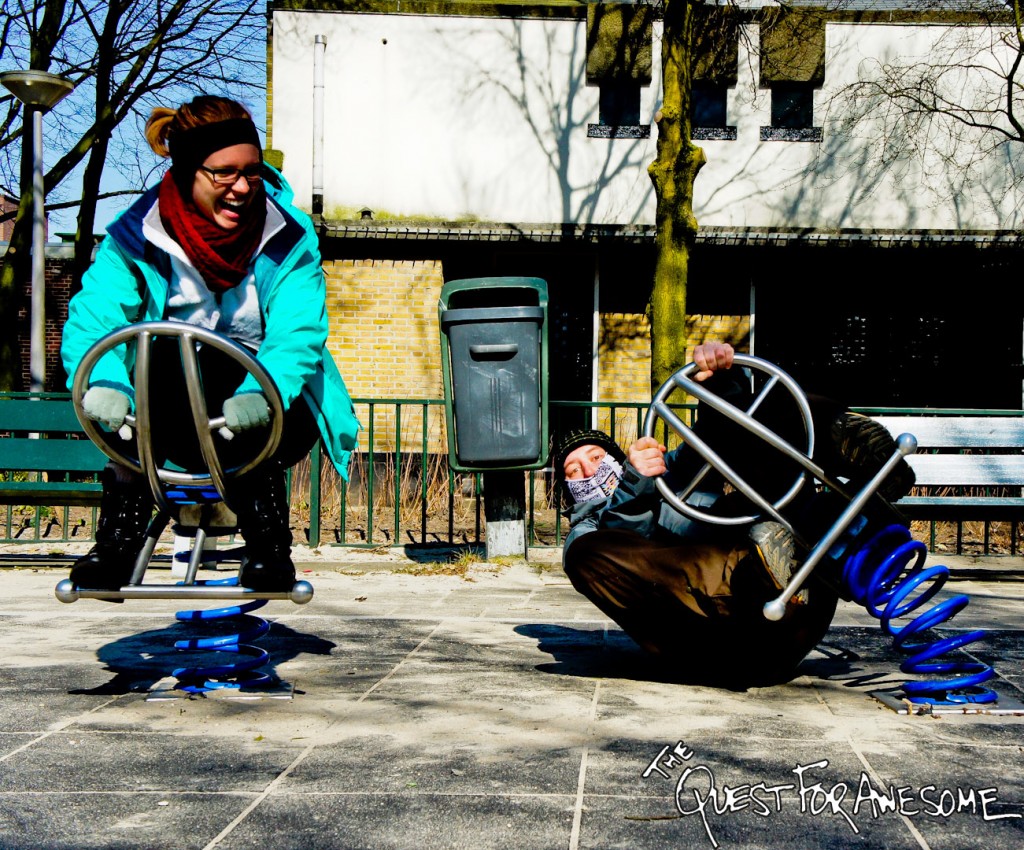 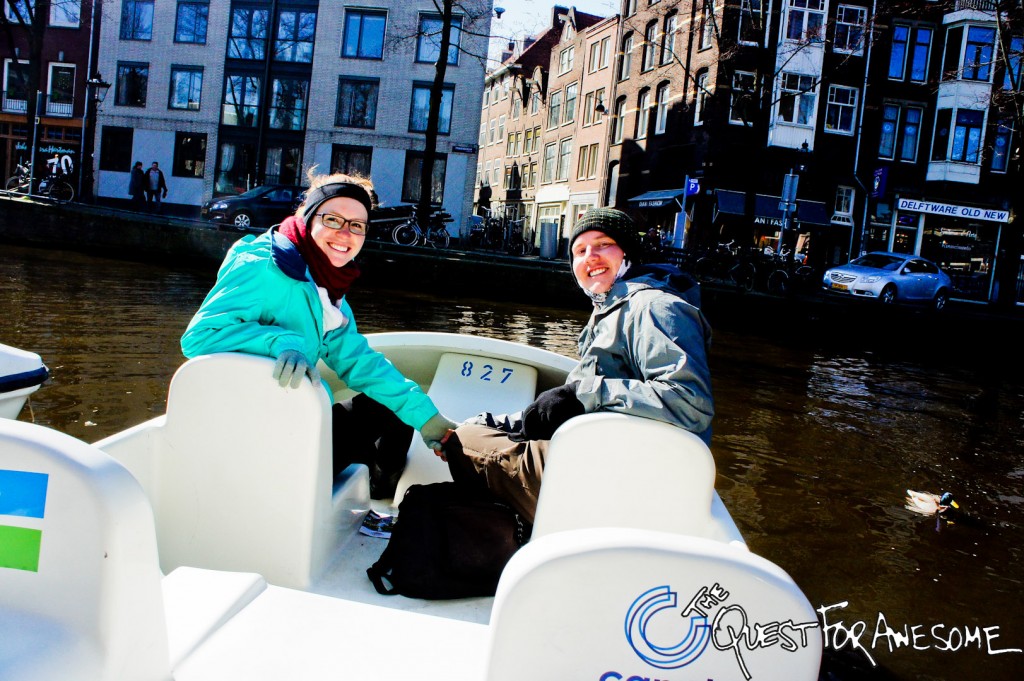 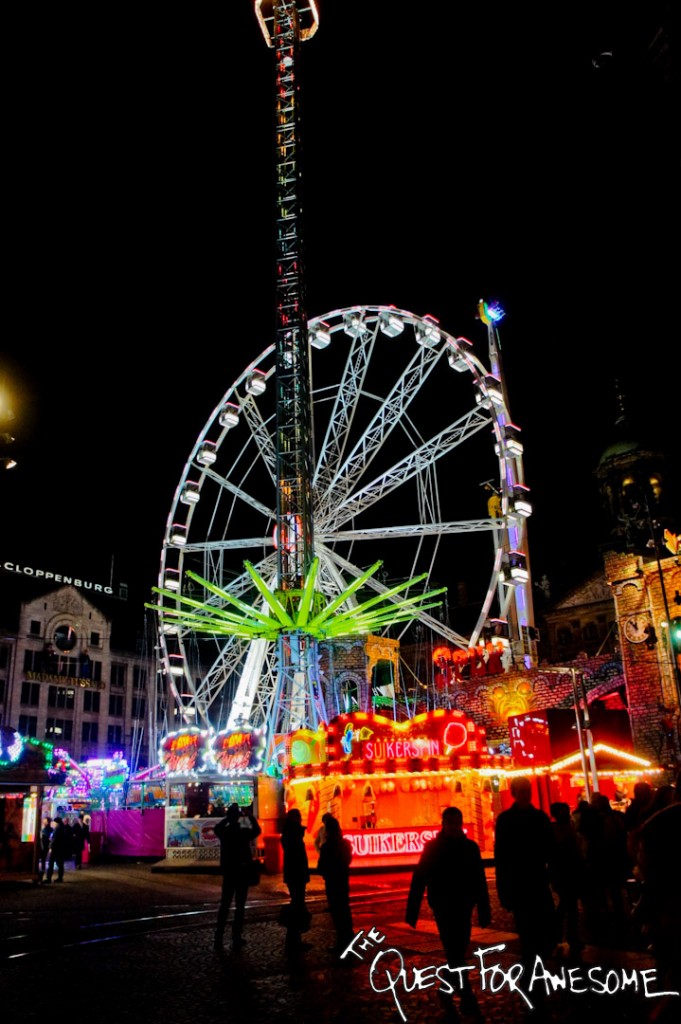 Volendam is a short bus ride away from Amsterdam, so a day was made out of it.

Cheese factory tour samples were destroyed, I finally hunted down a dutch style windmill and had an unplanned photo-shoot in traditional dutch garb. 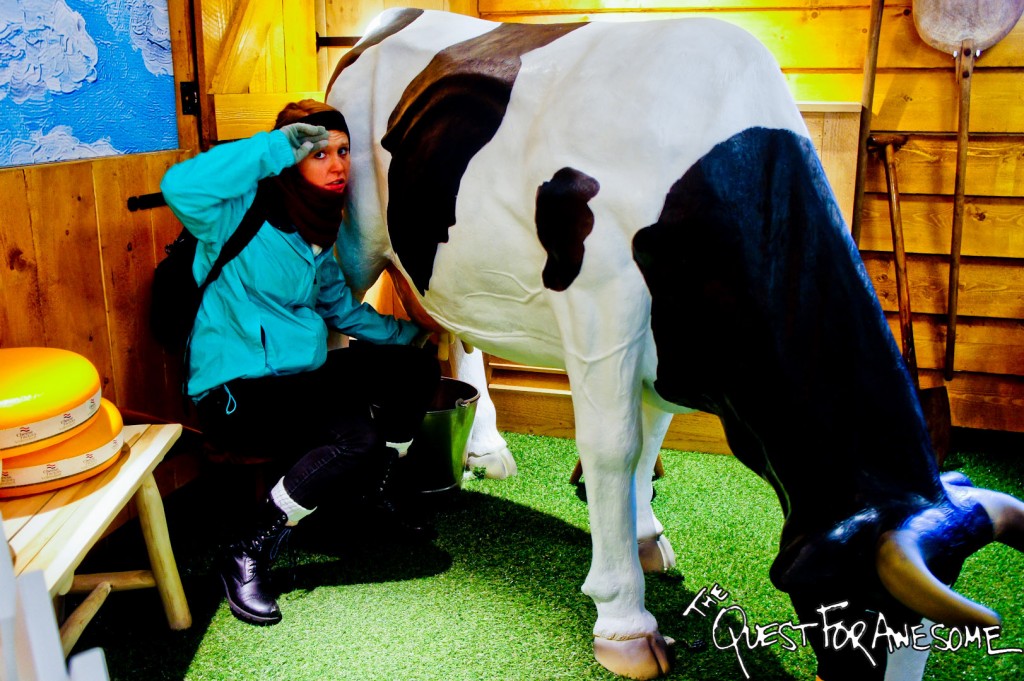 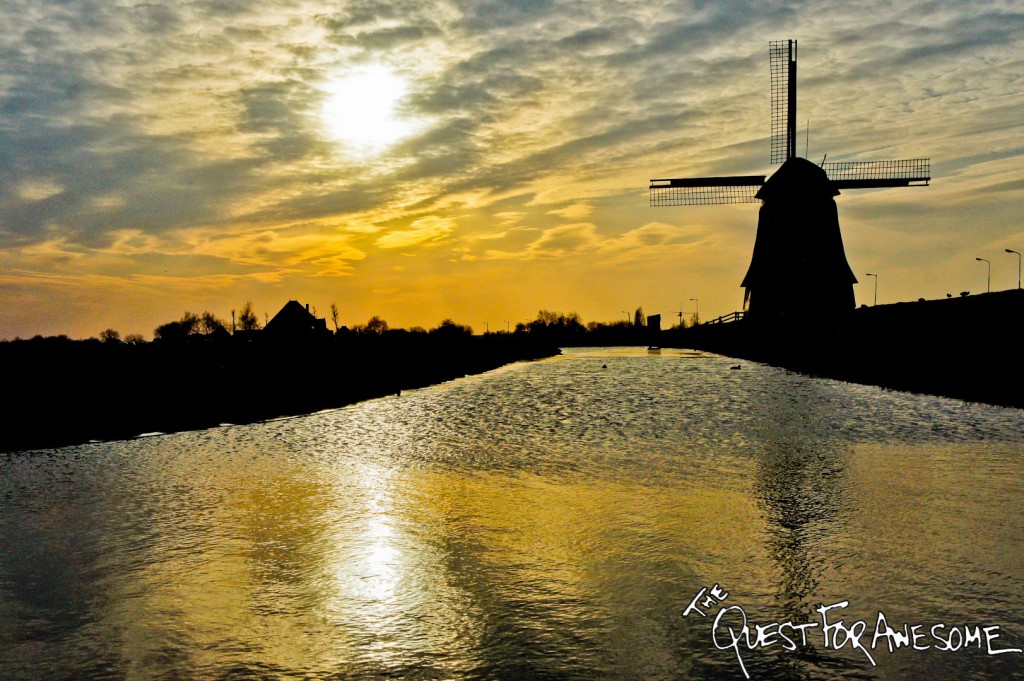 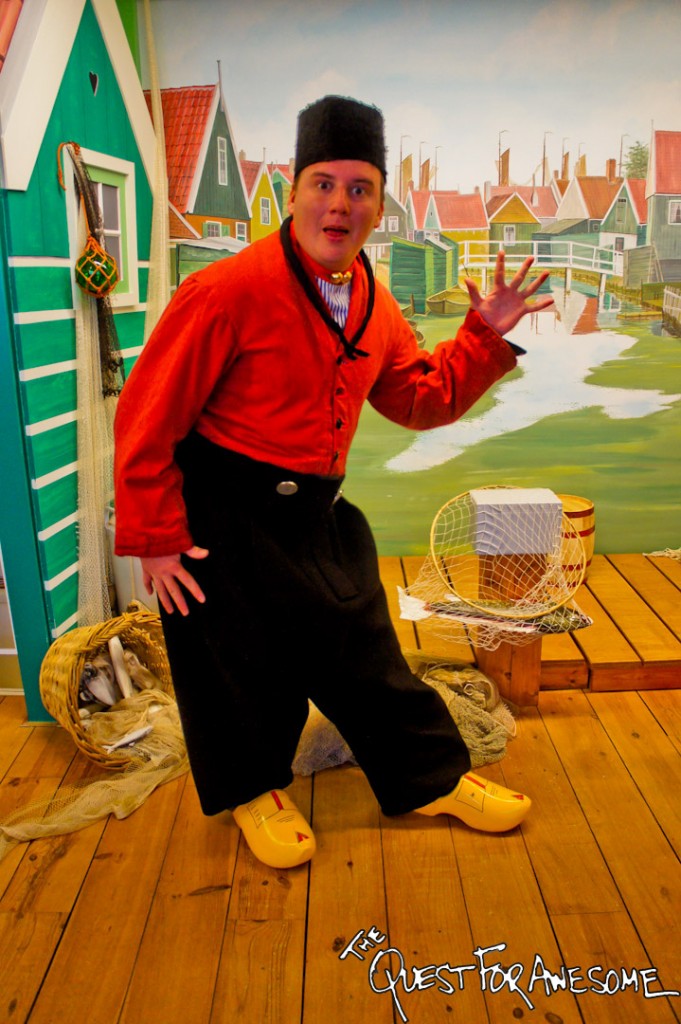 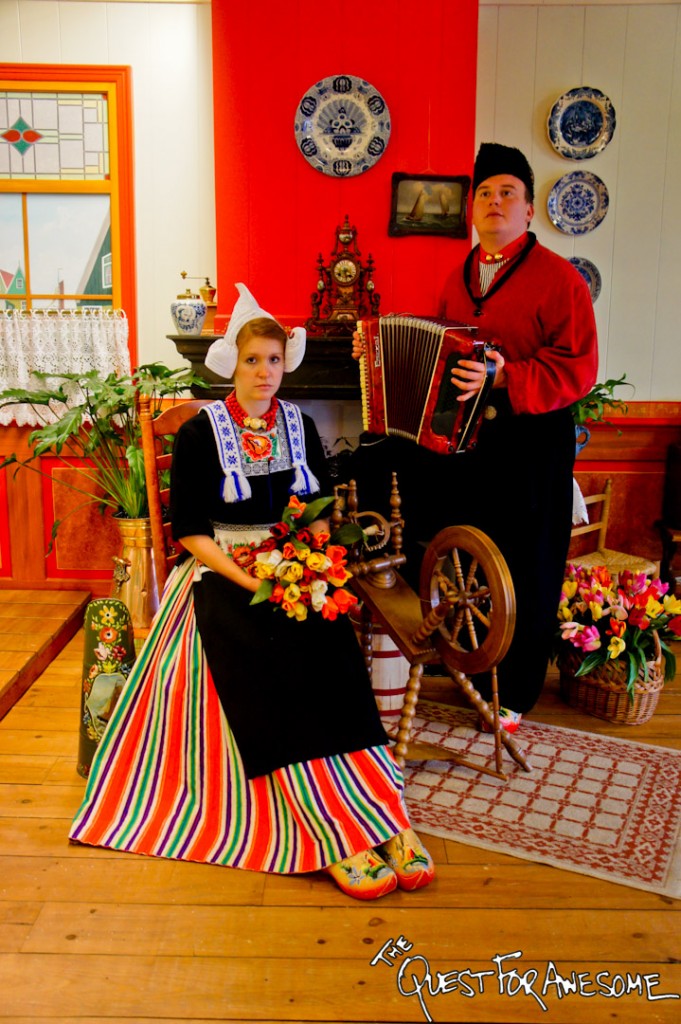 Back in Dusseldorf before saying goodbye to Shannon we went out of our way to go to dinner at Fuchschen Alt.

The restaurant was packed and we questioned if we should stay and wait. Waiting turned out to be a great decision.

We found seats crammed between two large German groups. The menu was in German and it was overwhelming. The huge party next door took notice of our confusion and one of the men put down his beer and took charge.

“I know what you need.” he stated boldly.

He made sure we ordered the marinated pot roast Rhineland style with red cabbage, potato dumplings and applesauce; and the pork-neck steak lumberjack style with caramelized onions, fried potatoes and salad.

One of the top meals of my entire trip.

A Book of Friendly Letters

My birthday is in February and during the trip it was spent having dinner alone in the South African airport before boarding a flight to London.

It was hard not being around family and friends.

However, before coming out, Shannon went around to my people and asked them to write me a note of some sorts.

At the end, with the help of her amazing roommate Julie, she compiled them all into a book to give me as a belated birthday gift.

I can’t tell you how helpful it was.

Reading all of the notes and looking at the pictures made me smile immediately.

I pulled out the book countless times when I went through bouts of homesickness during the rest of my travels and it always put me in a better mood.

So thank you to everyone who took the time to write something!

I decided to do my Eurotrip with a Europass, however, you need to have the pass sent to you.

This was a problem as I had no address and had no idea where I’d be when the pass arrived.

Luckily, Shannon’s trip coincided perfectly and she was able to bring it.

After she left I successfully activated it in the Dusseldorf train station. Let the train adventure begin!

My Gear Has Evolved As I've Been Traveling/Working from The Road Since 2012. Find Out How Things Have Changed

You May Also Enjoy...

My May Trip Highlights – Month 9

Learn how my gear list has evolved since I've been living/working out of a backpack since 2012.

Want to See What [Updated for 2017] Gear I Use To Travel Out of Carry On Luggage?

I've been living/traveling the world from carry on luggage since 2012...

That's AWESOME. Show Me, Please
No Thanks, I <3 Baggage Fees
x