This is the sixth post in a 12-part series detailing my monthly highlights from a year long trip around the world. To start at the beginning: click here

Month six of the trip was spent in three different countries: South Africa, England and Jordan. Looking back it seems as if I ate my way through February–juicy South African meats, the eclectic markets of London and the delicious-monotony of shawarma and hummus. Other highlights include: finally getting stopped and searched by customs for my complete disregard of normal packing behavior, the most amazing toilet I’ve ever had the privilege of using, drinking fresh goat milk, and my favorite adventure of the entire trip.

After London there will be a lack of photos because I lost about three months worth when my electronics were stolen in Hungary.  Bear with me as I do my best to paint you a picture where there no longer is one.

My last stop on the Baz Bus and in South Africa before heading back to Johannesburg was Cape Town. For our last hurrah, a group of Baz Bussers I had met on the way took a tour up to Table Mountain, ate some deliciously inexpensive meat at Mzoli’s Meats (I highly recommend eating here if you can), and hit downtown Cape Town hard until early in the morning. 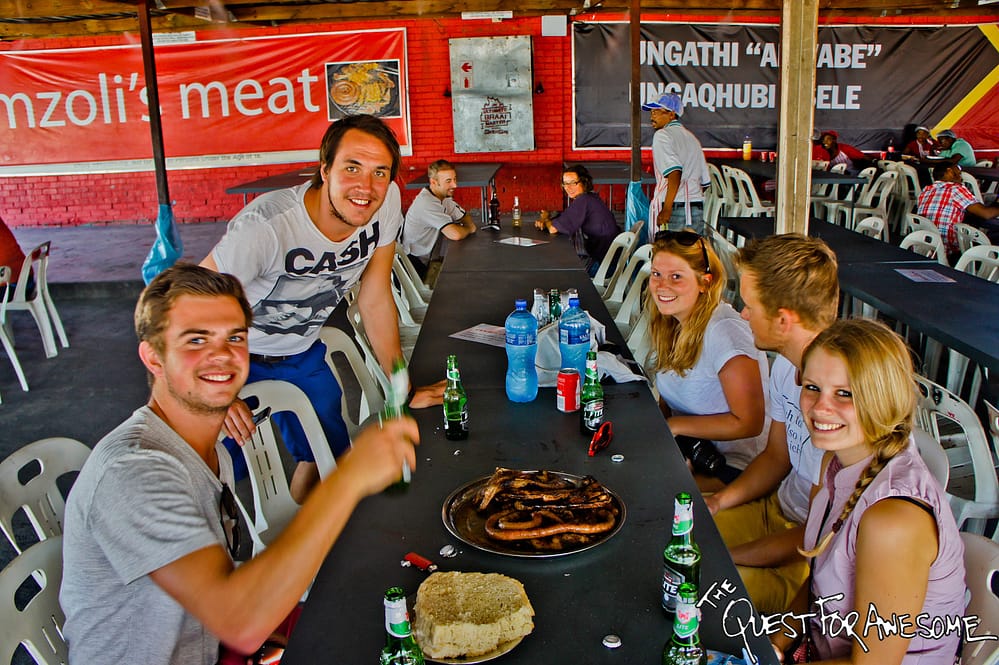 Train from Capetown to Jo’berg

One of the downfalls of traveling on a RTW ticket is you often find yourself taking out-and-back style trips, and therefore seeing scenery/towns twice. This is due to the restrictions of the RTW ticket requiring flying out of the same city you arrive in before heading to the next destination. However, sometimes you can set up the trip as a circle instead of an out-and-back, while still being cost effective.

For South Africa I was able to take the Baz Bus from Johannesburg to Cape town along the coast and then return by the Shosholoza Meyl (translates to ‘pleasant experience’) train from Cape Town to Johannesburg. The Baz Bus takes you along the coast, while the train goes through the heart of South Africa, where you get to see the dynamic landscapes–flat open space, mountains and vineyards.

My cabin-mate was a friendly local named John who schooled me on South African history as well as his affinity for designing dog beds out of old wine barrels. When a four hour delay was announced we made our way to the restaurant car where we dominated countless bottles of Black Label beer while chowing down on beef curry and pap (a local dish similar to polenta).

I didn’t plan much of my 12-month trip in advance except for the Eurotrip portion. I had three months in Europe and I ended up buying a two-month, unlimited EuroRail pass to see as much of the area as possible. I geeked out deciding what Eurorail pass to purchase; I wanted the option that gave me the most flexibility, while minimizing spending, on a route allowing me to see friends/family as well as a large variety of countries.

“Do I have to declare spices like salt and pepper for customs?”

It was an innocent enough question. But, the heavyset, rosy-cheeked airport security agent looked me up and down and ignored me.

“Where is your baggage?”

“This is it.” As I gestured to my small backpack and handbag.

I could see her eyes twinkle as she mentally calculated how many pounds of heroin and cocaine I must be smuggling into her country.

“You’re going to need to come with me, sir.” She was surprisingly stern.

There was no twinkle in my eye as I mentally calculated how many of her fingers were going to be in my bum if I didn’t give satisfactory answers to her barrage of questioning.

It was a mental fencing match as I toed the line between answering her questions politely and truthfully, while also trying to make her feel childish for taking the time to thoroughly search every inch of my backpack. She finally cracked a smile after discovering something promising, she quickly went cold again and gave up the search when she found out it was just a braided clothes line to dry clothing. She felt silly; I felt victorious. She left in a huff and I was left to repack my gutted backpack. So much for the British Politeness I’d heard so much about.

British food like bangers and mash, and fish n’ chips were decent, but, you could find loads of stunning cuisine from all over the world in the different London markets like Campden Lock, and the Burough and Brick Lane Markets.

I have to give a shout-out to Tanya, a gal I met while I was in Singapore. While I was in London she planned my stay for me; telling me what area of town to find a hostel, what markets and unknown sights I needed to see, and invited me to her going away party.

Shawarma, mansaf, lamb ribs, falafel, pita, zarb, mandi, baklava, hummus, figs, shish taouk, sugar cane juice, kanafa. These are just the foods I could find out the traditional names to. The fare here was different than anything I was used to, but oh-so-delicious.

On my drive down to Petra from Amman our driver stopped at his friend’s “house.” He lived on the edge of large canyon in a tent he had constructed himself. He poured us some of the tastiest and distinct coffee I have ever had (he had added Cardamom) and gave us a tour of his off the grid tent.

30 yards from the main tent I noticed a small hut sitting right on the edge of the cliff. Saba excitedly rushed us over to show us his “loo with a view.” It was a three-sided bathroom with a western style toilet. The fourth wall had been removed so when you were sitting you had an amazing panoramic view of Jordan’s version of the Grand Canyon.

Very impressive ancient ruins. On my day exploring this old city I met a friendly local selling trinkets on the side of the pathway. This chance encounter led to having the most memorable experience of the entire 12-month trip. You can read the entire story: here.

After leaving Petra I made my way to Wadi Rum–a large valley cut into the sandstone and granite rocks–where you can find marks of many ancient cultures in the form of rock paintings, graffiti, and temples. It has also been used as a filming location for Lawrence of Arabia, Red Planet, Transformers, and Prometheus.

Luckily, the Bedouin who inhabit the area make their living on the tourism that comes through, because I had made zero plans. I met a local named Ead and we haggled out a tour for my two nights there. I slept under the stars, tended to the goats with his mother, drank fresh goat milk with her while she played her flute, and explored the beautiful rock structures.