This is the eighth post in a 12-part series detailing my monthly highlights from a year long trip around the world. To start at the beginning: click here

Month 8 was a month full of trains, boozing in a multitude of countries and meeting up with familiar faces.

Some of the highlights you’ll find below: ordering beer in a bar that is in the Guinness Book of World Records, the most creative beer coasters I’ve ever seen, my first rope swing and drinking shots of Unicum under a heard of stuffed rabbits.

First up was Delirium on tap at the Delirium Cafe; they made it into the 2004 Guinness Book of World Records by having 2,004 different beers available to order in their bar.

Next was Mort Subite (translates to Sudden Death). The Belgium brews are stern, so after only two stops I was already a bit tipsy.

Drinking in the bars was awesome for the ambiance, but it was a little too rich for my blood. The final “brewery” was the market where I picked up ten different premium Belgium beers.

The most expensive was Delirium Nocturnum for 1.75 euros, which was the same price as a Budweiser. What.

A Day in Ghent Before Bruges

If you’re ever in Belgium and make it to Brussles, Ghent or Bruges, you’ll find maps around the cities and hostels called “Use-It” maps. They are amazing.

They have great tips on restaurants, breweries, architecture, street art and other local tips; I highly recommend picking one up as you tour the city.

Ghent offers some great scenery to stroll around and check out for the day. I picked up a Use-It map, planned a route, took the lens-cap off my camera, and put some miles on the shoes.

My favorite stop of the day was a huge abandoned concrete plant on the outskirts of town that is now covered with amazing street art.

My second favorite stop was Gruut Brewery, where I found the most creative beer coasters I’ve ever seen. You put two coasters together, place their beer glass in the correct spot and the beer glass reflects back a picture from the coasters.

It’s hard to explain, so hopefully the pictures below will help. The first one reflects back a woman leaning against a palm tree and the second reflects back a blonde woman in a black dress. 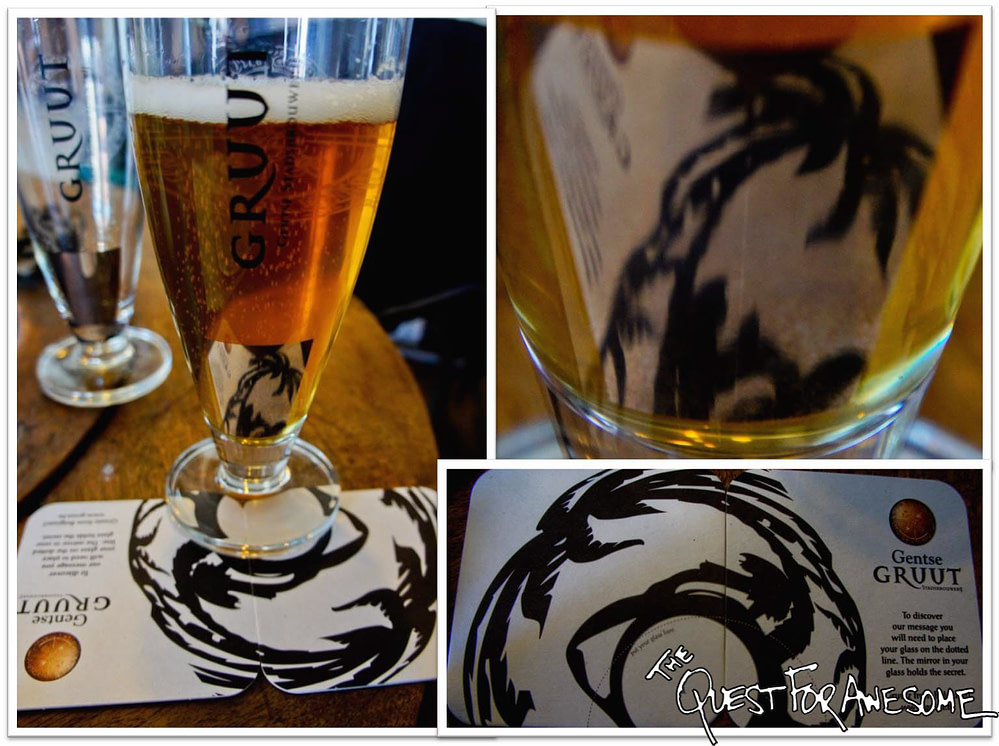 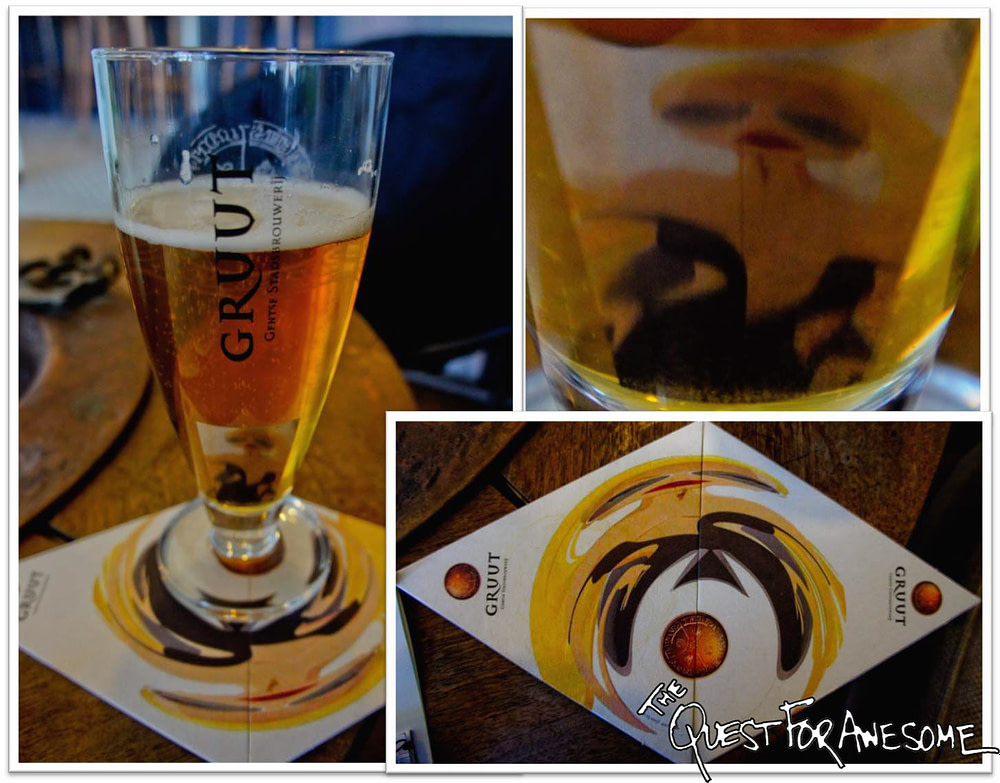 I met Saskia back in my second month of traveling in Melbourne, Australia. Below is a picture of us in Hosier Lane in Melbourne.

We stayed in touch and she happened to be back in her hometown of Bromskirchen, which was near my route as I traveled through Germany on my way to Switzerland.

I stayed with her and her family in their cabin-style home. They hung up an American flag in their driveway for my arrival and cooked delicious German dishes for me for dinner. Pork ribs, sauerkraut, mashed potatoes and potato salad, bratwursts with mustard, schnitzel and plenty of weiss-bier.

We took a trip to see the local bobsled track (bob-bahn in German) because I had never seen one in person; and met up with her friends to play drinking games before heading out to rage at a disco party in a huge warehouse where I learned Germans use the term “pure” to order liquor by itself (in the US you often hear people ordering liquor “straight” if they don’t want a mixer or chaser).

Thank you and your family again for the hospitality, Saskia! And tell Wiebke I’m sorry/happy I could be part of her first experience of what happens when you drink a tad too much…

Meeting up with Eric in Freisen

My half brother Eric has been living in Germany for a number of years, so I decided to stop in for a night to see him.

He is currently stationed at the US military base in Baumholder where he runs the Hilltop Theater. That night they were running through their show “God of Carnage” for the close friends and family of the actors, so I got a great idea of what Eric gets to do.

Switzerland is beautiful, and the trains are a great way to see some of the landscapes.

I took the train into Interlaken and then up into Grindelwald.

I happened to get into town right at the end of ski season and before the warm weather crowds started coming in. The result were some very empty mountains, loud yodeling and some photo shoots

Another buck naked shot was taken in the snowy mountains, but I’ll spare you this time. If you must see man ass you can click here to see the picture that started it all. Just replace the waterfall with snowy mountains and put a Swiss flag in my hand and you’ll get the idea.

I hiked from Grindelwald to Brandegg one day and the next went up to Bort. Didn’t see a single person.

If you’re train-ing through Switzerland I highly recommend stopping in Brienz on your way into Luzern from Interlaken.

An old co-worker of mine was working at the US Army base in Garmisch-Partenkirchen, so instead of heading to Munich, I decided to spend a great five days with her.

Between drinking plenty of beer, eating plenty of doners and spending plenty of USD at Peaches we made it out to Lake Eibsee where at the tender age of 27, I was able to go on my first rope swing.

The water was a tid bit nipply, but the scenery just couldn’t be beat.

I made a quick stop in Salzburg to meet up with Clemens and Guillermo, who are friends of the Austrians I met in South Africa.

In the morning, hangover in full effect, I made my way to Vienna where I took full advantage of the perks of my 1st class EuroRail pass that gave me access to the OBB 1st class lounge in Vienna.

Gummy bears were had.

I explored Vienna for a few days and was able to eat my first, legitimate, Wienerschnitzel (translates to schnitzel made in Vienna).

And now I was on to Budapest, where I stayed much longer than originally planned due to some unforeseen circumstances…

Hiking to the top of Gellert Hill

There are beautiful views of both Buda and Pest. I’d recommend going at night as well.

On my way there I was approached by a few prostitutes/scammers (I think) who commented on my beautiful straight and white american teeth/smile and invited me out with them.

There have been reports of this happening and at the end of the night the ladies leave and the bill is brought by an intimidating man who demands much more money than the bill should actually be for.

Who knows if this was what they were actually planning, but it seemed sketchy, so I excused myself quickly.

Later in my stay I’d meet Steve at the police station, who had this pulled on him without the women.

Him and his friend went out for drinks. The bill should have been the equivalent of 50 USD, but he stared down to see 1000 USD.

He started to make a fuss, and that they didn’t even have that kind of money.

I took a ruin bar pub crawl with the hostel I was staying at. Budapest is famous for these ruin bars and it’s hard to describe exactly what they are.

Some of the decorations included: herd of about 100 taxidermied rabbits hanging from the ceiling to make it look like they were running through a room, chairs hanging on walls and random frames. My favorite was a room decorated with deconstructed instruments hanging on the walls and ceilings.

A shot of Unicum

This is a Hungarian liquor with a giggle inducing name that tastes like an extremely bitter Jagermeister.

Taking the train out to Visegra’d to see the castle

I can hardly say this was a highlight but it could have been much worse. The help from those around me made it so much easier to deal with.

Thanks to my mom back home who successfully to sent me a new phone.

Thanks to Scott who helped me stake out the train station for the day to try and find the thief.

And thanks to the Home Plus Hostel Employees who helped with the language barrier between the police and helped get the police report finished for my insurance.

How Much Does It Cost To Travel The World? My 2015 Expense Report