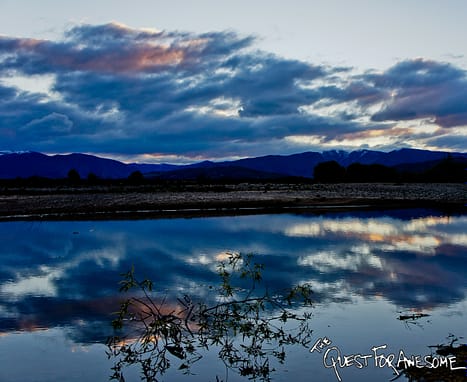 This is the second post in a 12-part series detailing my monthly highlights from a year long trip around the world. To start at the beginning: click here


My second month highlights include my road trip through the north and south Islands of New Zealand and my journey back to Australia where I spent a week in Melbourne before heading out to Perth to meet up with an old friend, whom I’ve known since 6th grade. On to the highlights!

In the far south of New Zealand is Curio Bay, which is one of the few places in the world where you can get close to Hoiho penguins, one of the rarest penguins in the world. I arrived just after sunrise and had the bay all to myself to watch about 15 penguins waddle around and interact with each other.

My favorite thing to do was follow a penguin around until it needed to hop onto a rock. It would stop and assess the hop, pause for dramatic effect and then blast off onto the ledge. I love the penguin hop. I penguin hopped up all the stairs on the way back to my van before leaving. 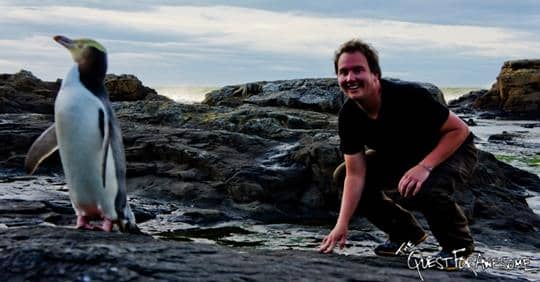 Entertaining Myself with all the Down Time

I was on this road trip through New Zealand for 14 days. I was sleeping and eating in the van and driving like a mad-man, trying to see as much of the country as I could; I didn’t have internet and radio was spotty. I didn’t realize it at the time but the amount of human contact I had was minimal—even though I enjoy my alone time, after 3-4 days the novelty wore off and I realized how nice it is to be around people, even if you’re not directly interacting with them.

A majority of the alone time was spent filming and getting weird for my video, however some other activities manifested to fill time. Some of my favorites were:

On the north-east coast of the South Island is a town named Kaikoura. I stopped here for a few hours to admire their beautiful black sand beaches before heading to Ohau Stream. During the winter, hundreds of New Zealand fur seal pups travel up this stream to the waterfall where they interact socially with each other while their mothers are feeding at sea. While I was here there were about 5 pups playing and interacting with each other in the small pond, you can see 2 of them splashing in the bottom right of the photo.

The Helpful New Zealanders When My Van Got Stuck

I told a more detailed version of this story at the bottom of my logistics post. But basically, I got my campervan stuck Questing for Awesome; I had to spend a good chunk of money to get it out and it put me in a pretty sour mood for the next 24 hours. After reflecting on the whole incident I realized I had overlooked the positive aspects and the amazing displays of humanitarianism.

The glow worms are an interesting insect. This particular type (Arachnocampa luminosa) is endemic to Australia and New Zealand. The glowing is caused from a chemical reaction from excretion, so basically, the beautiful glow you see is from the poop/butt.


The insect spends the majority of its time in the larvae phase (glowing phase) where they hang down poisonous silk snares to catch their food. When they pupate into an adult fly, they have no mouth and no way to eat, so their only job is to mate, lay eggs and then get cannibalized when they get stuck in the silk snares.


Never have I been so stoked to spend money to marvel at glowing poo-poo. Found the photo below from here, because it was too hard to take a decent photo with my camera.

When I first created my bucket-list I added a lot of items for the sake of adding items. As I’m actually crossing stuff off the list I’m realizing some of the items (like “Zorbing in New Zealand“) aren’t the most important things to me, but instead, are a fun way to quantify hard to define goals like “seeing the world.” By breaking up a large goal into smaller (sometimes seemingly unimportant) pieces it’s easier to see yourself making progress.

Melbourne is a cool city. I stayed at St. Kings Backpackers hostel and met some really fun people in my dorm, one of whom commented on my snoring with: “your snoring is like rain falling from the sky, so peaceful.”

The city itself has a very young artist feel; there’s interesting architecture, graffiti and a hip vibe all around. Walking around Melbourne at night was one of my favorite activities; I also met up with “La Jane” who is a-friend-of-a friend. We went out for drinks and antipasto and she let me crash on her couch for a night (my first couch surfing experience of the trip).

Seeing the Southern and Indian Ocean in 1 day

I met up with my good mate Steve in Perth just in time for his Cape-to-Cape mountain bike race—a 4 day race starting at Cape Leeuwin and ending at Cape Naturaliste. I was the road crew and was responsible for cooking meals; setting up and breaking down camp; and shuttling him to and from the start and finish lines in his beast of an automobile: The Defendah.

One of my favorite moments from the race was after day three, where the race ended at Colonial Brewery in Margaret River. We purchased a growler of their pale ale, took it back to camp, and after enjoying the contents of said growler, afternoon napped so hard under a shady tree that our kindergarten selves would be proud.

Hope all is well with you beautiful readers out there. I’m almost a month into my Eurotrip. I began in Madrid, Spain, flew to Dusseldorf where I met up with my girlfriend before heading out to spend a week together in Amsterdam. After sending her back to the States from Dusseldorf I activated my Eurail pass and headed out to Belgium for a week.

After Belgium I came back to Germany and met up with a friend I met in Melbourne who is from Bromskirchen, I then made my way south to meet up with my half-brother who lives in Freisen.

Currently, I’m in Interlaken, Switzerland and will be enjoying Switzerland for a week or so before heading off to Austria. I’m moving around every other day it seems and have been spending a lot of time on trains, which I don’t mind as it’s a beautiful way to see the different countries.

Oh, and the featured image was taken at the Ahuriri Bridge campsite, where I camped on day 5 of my New Zealand roadie.